First and foremost, this thread is a bit of a repost from a previous thread by user oldwingratbike who was the first (by all of my research) to bolt on a 2" hitch to his xB and post about it. This thread will go a little more in-depth and cover some things the previous thread did not.

You can find the original thread by oldwingratbike (thank you, amigo) here:
http://www.clubxb.com/forums/scion-xb-suspension-chasis-modification/34666-class-iii-hitch-install-xb-5spd.html

-The xB is NOT rated for towing, this mod is NOT "factory", "tested", or even "reccomended". Understand that common sense and logic applies, this is done at your own risk. Obviously, Toyota Motor Corp. (and/or myself for that matter) am in no way responsible for what you do with this information.

-5 speed manual is recommended, the xB is NOT rated for any towing. Manual transmission is far preferable for towing than automatic. An automatic trans in comparison will have a lower tow limit, struggle more, and cause more damage to the transmission.

-These are all personal recommendations on "how to", this is not a bible. Take it with a grain of salt, and modify what you see fit.

WHAT YOU WILL NEED:

1. Reese universal hitch product #37042
[ame]http://www.amazon.com/Reese-Towpower-37042-Multi-Fit-Receiver/dp/B000CQOIR8[/ame]
I bought mine used on CL, searching with they product number. They are discontinued from manufacturer but the manual is still available if you call Reese. They fit a multitude of vehicles and are fairly common to find used.

4. Two (2) bolts, size M12 x 1.25 x 35mm. and two (2) washers
Find them at your local hardware store or fastenall. My Home depot did not have it, had to find a mom&pop store that did. These bolts will mount the hitch in place, in addition to the two bolts you will remove from your OEM tow hoook.

6. (recommended) auto jack stands for suspending hitch as you fasten 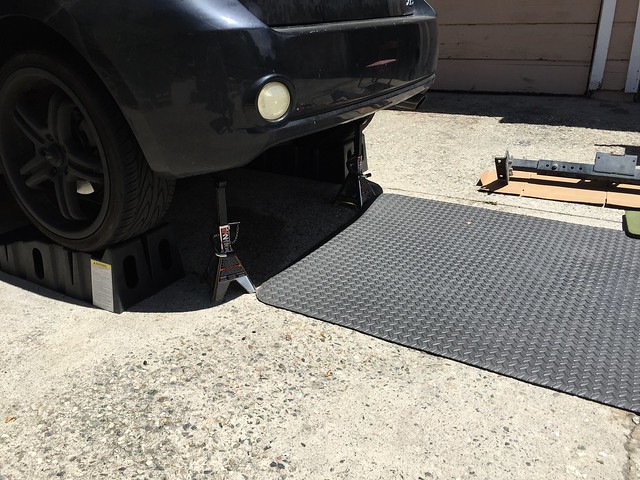 Lets get started. Get your xB on the lift or ramps, get a suitable working space going with your creeper/dolly (i used a foam mat).


Locate your OEM tow hook on the driver side, its an unimpressive black hook with two bolts in it. Remove both bolts and hook, save the bolts. 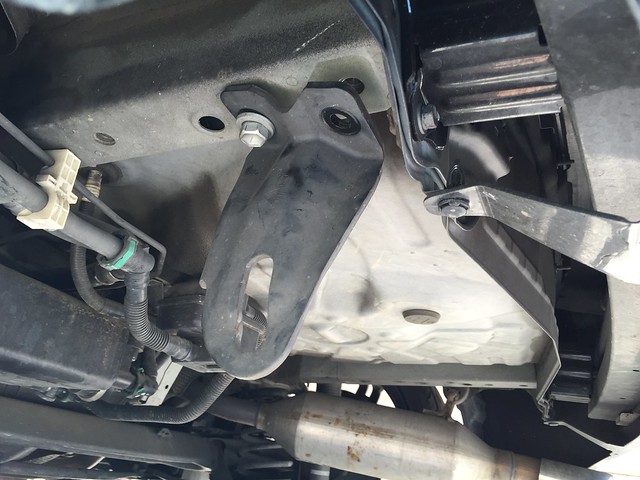 If you have not already purchased your two additional bolts, now is the time. You need two additional bolts similar to the ones you just pulled from the OEM tow hook. They are M12 x 1.25pitch, roughly about 35mm long.
Here are my two OEM bolts next to the new ones. (OEM on left, new on right) 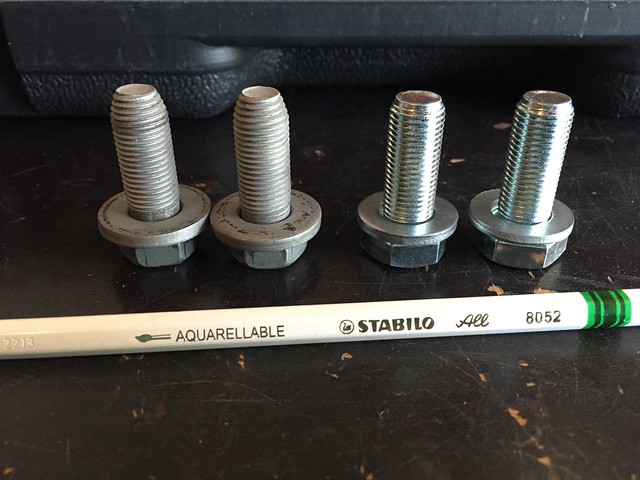 Now we'll modify our hitch. We need to remove two sections of material to get it to fit properly into the chassis without interfering with the OEM equipment.

On the passenger side of the hitch, we want to remove a 1" x 4" section of the mounting bracket where it bolts to the hitch arm. The bracket barely touches the exhaust when its in position, we will remove a section so it does not rub or hit the exhaust. 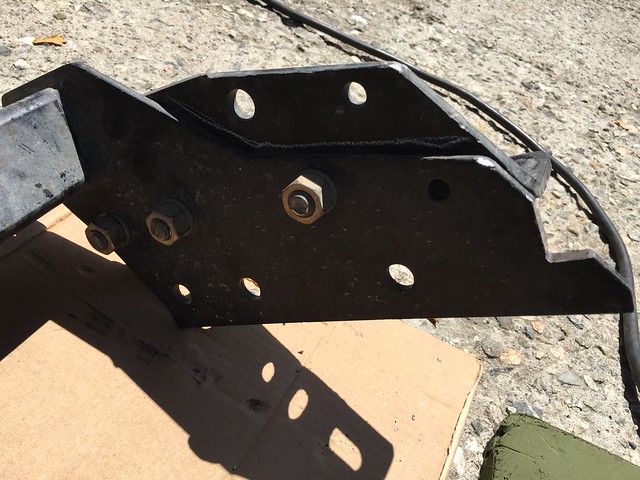 I marked the cut out with a little white grease pen. 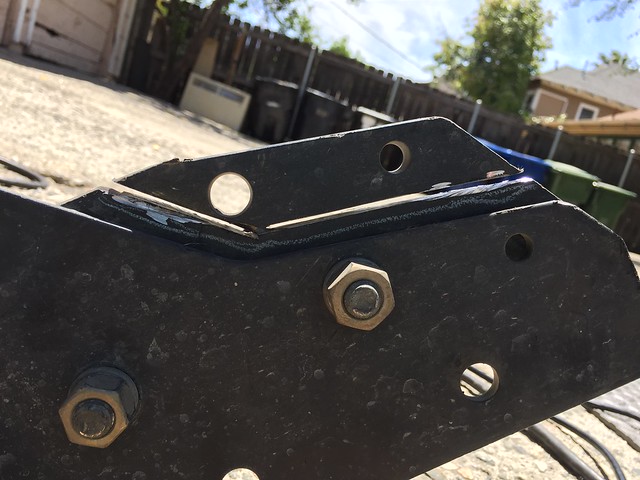 As long as your cut out encompasses the mounting holes, you are fine. 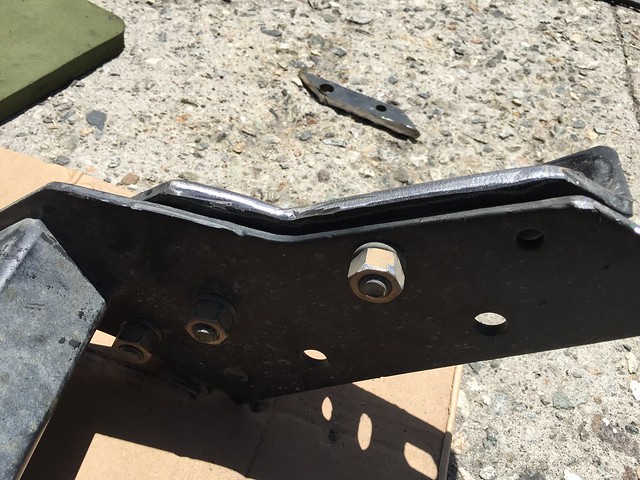 When you are done, use your grinding wheel to smooth down the edges and excess material. You dont want to slice your hands open later. 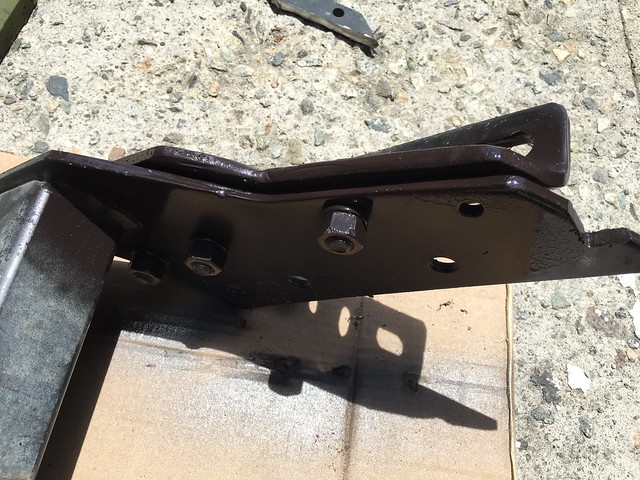 I hit it with a couple coats of rustoleum to prevent it from rusting over. and because... its cooler.

Heres what it looks like mounted, with the cut out clearance 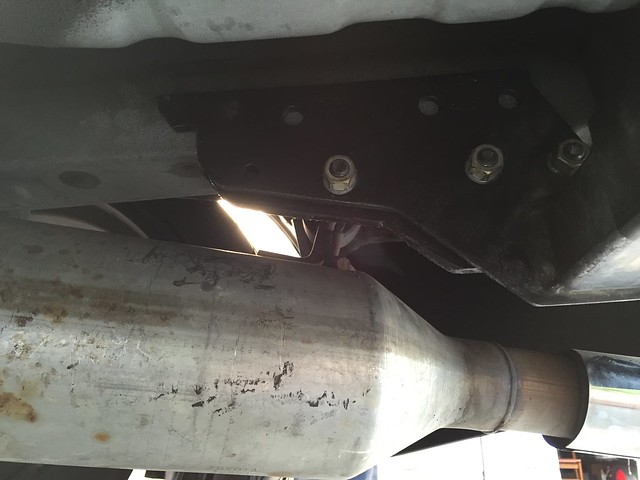 Your second cut will be on the opposite side mount bracket. On the driver side of the hitch, the mounting bracket has a little "finger" that sticks out the back. There are lines routed in the area where this will mount (few inches behind where your OEM tow hook was) and it will not fit around these lines. We want to cut this little part off so it fits and clears the area safely. 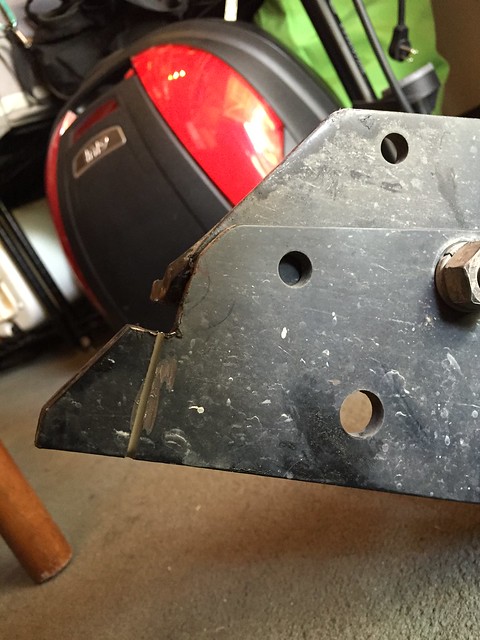 Cut off this little guy at the end, straight line marks the cut off. 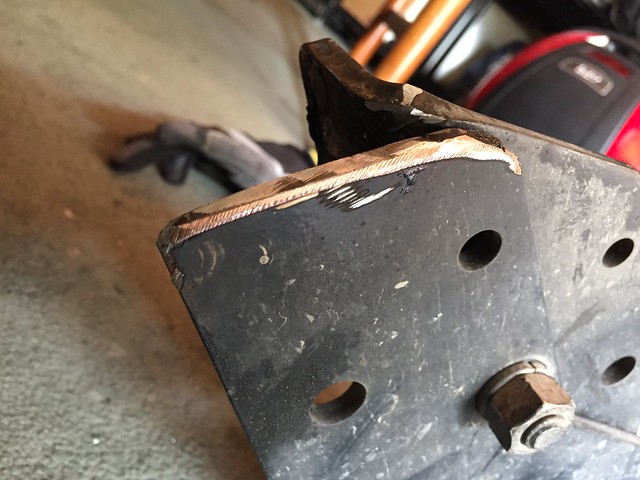 Done. Now grind/smooth the edges and throw on some spraypaint.

And heres what it looks like mounted, with the corner bit cut off for clearance 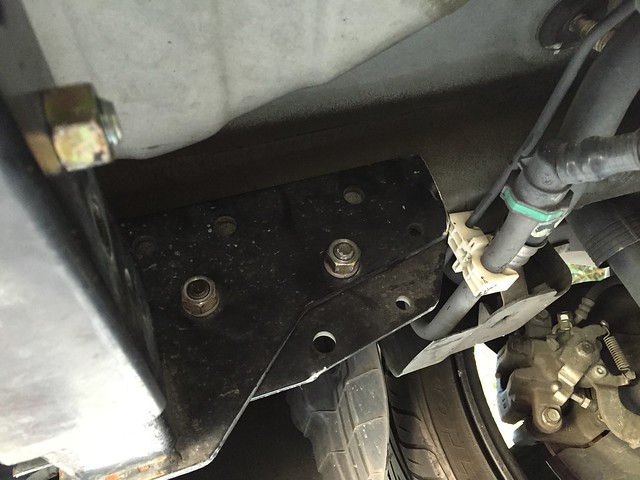 Next, we need to adjust the hitch properly. Check your 37042 hitch around the center where the "arms" are mounted, if you loosen the four (4) bolts in the center, the arms can slide in/out about 1.5inch. I have found the best spacing is to have the two (2) bolts on the receiver side at the 2nd holes from the middle, and the rear two (2) bolts on the back of the receiver at the 3rd holes from middle. At this position, with the arms fully extended out, it should fit perfectly into tounge of the chassis.

Now you just need to mount it. Get it up there on your jacks and into position. Its very clear where it will mount once you get it lined up.
Use your four (4) bolts w/washers to mount this into place. Use some threadlock for added insurance.
Make sure all your nuts are tightened down, including the adjustment ones in the center of the hitch. 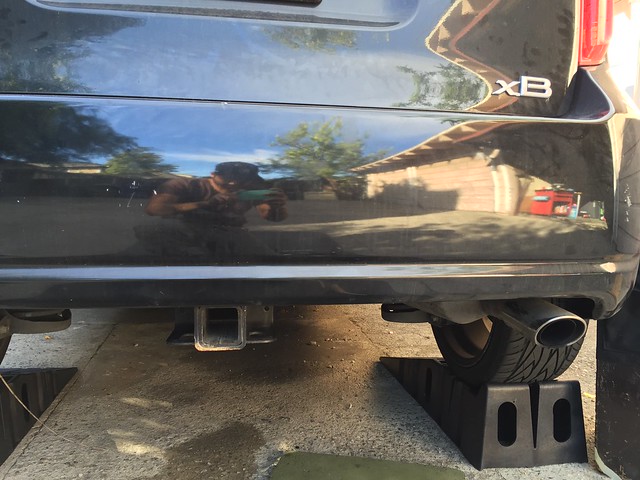 And we're done! Its a very clean (and very discreet) install if i do say so myself!